When I returned Stephanie Eldringhoff’s phone call as I was driving home from a long day of business meetings in Los Angeles on Tuesday January 15 2013, her first words were, “pull over to the side of the road.” I of course knew this meant she was about to deliver extraordinarily good news or bad news. From the composed but shock-filled tone in her voice, it seemed clear that it would likely be the latter. But, about whom or what?

I quickly exited Interstate 5 and found a safe place to park since I don’t feel particularly safe parking on the shoulder of that freeway. I then called Steph back. What she told me seemed impossible: my co-founder of the Association for Comprehensive Energy Psychology, Dr. Dorothea Hover-Kramer, had suddenly and unexpectedly died of a heart attack earlier in the day. Her husband, Chuck, had called Steph to give her the news because of how close Dorothea and Steph had become in recent years. He asked her to pass it along to key people in ACEP who knew and loved her, so they could in turn pass it along to others. Of those who Steph had immediately started to contact, I was one of the last with whom she had been able to share this news.
As unfathomable as it was that someone as full of life and verve as Dorothea could suddenly have died, I immediately felt its truth in my body because I vividly saw in my mind’s eye the scene that Steph described. So vividly that it was almost like I had been there physically. Dorothea had parked in the parking lot of a restaurant to meet friends for lunch. She was found slumped over her steering wheel. The doors were locked so she hadn’t even begun to leave her car for the restaurant. By the time the paramedics arrived to liberate her from the car and attempt to resuscitate her, she was gone.
As part of my grieving today, I have been flooded with memories of how Dorothea and I met and why we decided to enter into a collaboration fifteen years ago that would end up bringing so much good to so many people. I’ve written this piece as a tribute to Dorothea’s magnificent part in that collaboration. I hope it also gives those of you who knew Dorothea a deeper appreciation of some of her gifts that you might not have known about.
Dorothea and I first met in 1998 when she and her husband Chuck still lived in San Diego. I had attended, along with my first wife, a class Dorothea gave on integrating treating the chakras and biofield into psychotherapy. The three of us met for lunch soon thereafter and enthusiastically discussed the huge range of benefits that integrating meridian-based, chakra-based, and biofield-based psychotherapy methods would provide to clients.
She then told me the same thing that Dr. Gregory Nicosia, whom she hadn’t yet met, had said to me a couple of years earlier: the time had come to create a professional association for practitioners of energy psychology methods. One that would unify the field, establish its credibility, set professional standards that would ensure its sustainability, and steward its expanding visibility and popularity.
When Greg told me in 1996 that I needed to be the one who created this organization, my response to him that he was out of his mind (although my wording was much more vivid, shall we say!). A couple of years later, I was shocked all over again as I heard myself saying yes to Dorothea’s suggestion that she and I do this together. (My first wife was part of these initial discussions, but her personal circumstances soon thereafter precluded her from remaining actively involved in building ACEP’s infrastructure.)
In hindsight I said yes to Dorothea because it was clear that she and I could birth together what neither of us could have done alone in nearly as good a way: 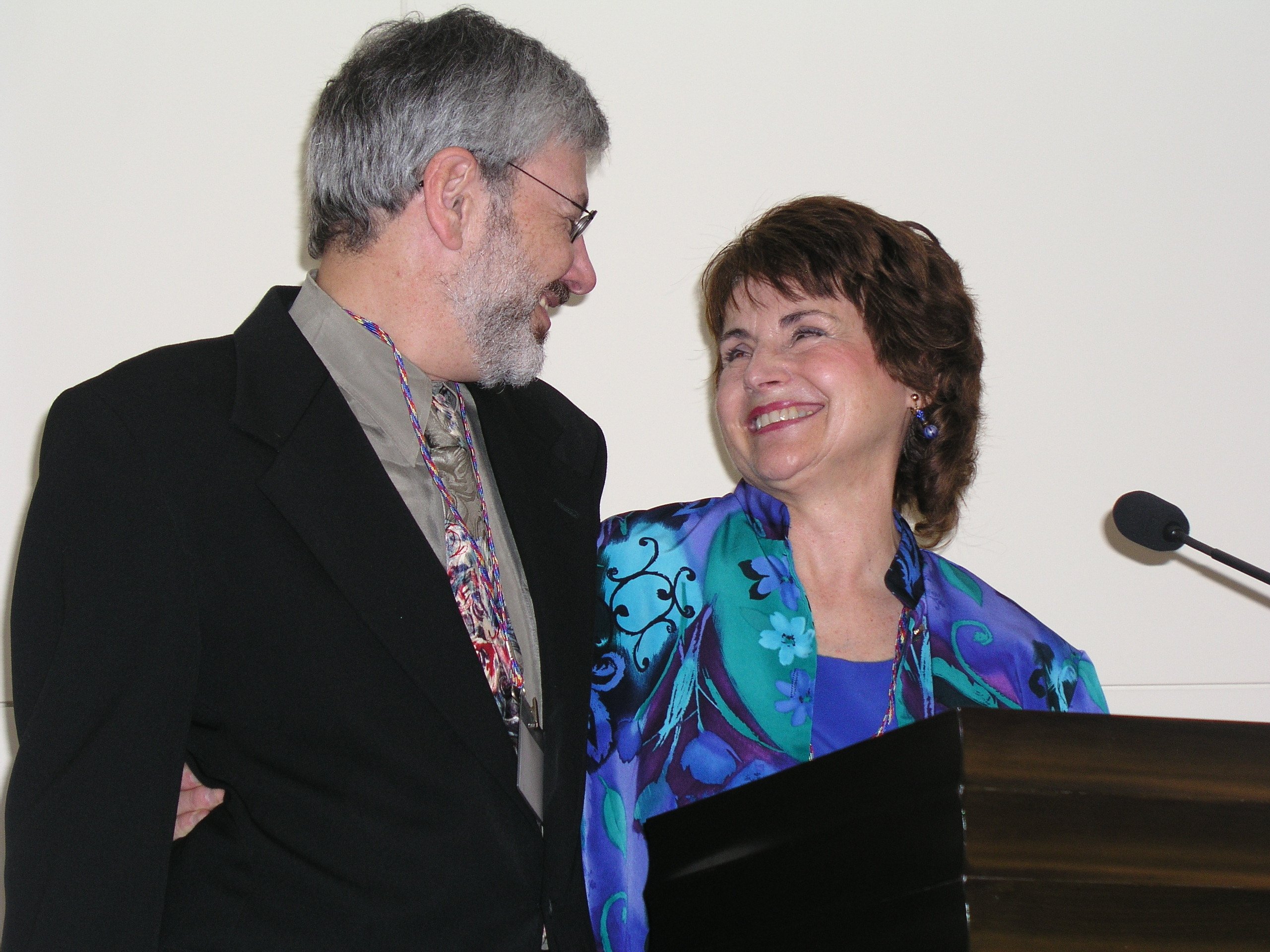 Dorothea and I also saw eye-to-eye on three core values that would centrally influence the foundational principles on which the Association for Comprehensive Energy Psychology would be built:

By the end of 1998, ACEP had been approved by the State of California as a nonprofit corporation (it was thereafter approved by the Internal Revenue Service as a tax-deductible nonprofit, and rapidly grew into an international organization). And the Comprehensive Energy Psychology training programs we developed became the first ones ever approved in California for continuing education credit for psychologists.
Since we opened ACEP to membership in the first half of 1999, all of Dorothea’s and my initial dreams and goals for the organization have been achieved:
I am ever-so-grateful that Dorothea got to see ACEP achieve all of the initial goals she and I had for it before she “graduated!” There remains so much more for ACEP to accomplish, but I take particular comfort in knowing that Dorothea left this plane of existence having seen all of these steps in the first phases of ACEP’s lifespan having been accomplished.
Dorothea and I had often talked in recent years about the comfort we took in knowing that ACEP’s continuance no longer depends on her or my day-to-day involvement for it to continue to flourish. We also took great delight (and relief!) in ACEP having developed to where we could simply be elders and visionaries.
In recounting all of this right now, I feel infused with a whole new level of appreciation over why Dorothea and I were brought together. There is a Yiddish word, “bashert,” which roughly translated means “meant to be.” Our collaboration in birthing and nurturing ACEP was most definitely “meant to be.” From my heart and spirit, I thank you ever-so-much, Dorothea!!

Before I offer my final reflections on Dorothea’s passing, I first want to acknowledge the ways in which Dorothea was a Renaissance Person. She was far too expansive a presence to be limited by being a nurse, a psychologist, my ACEP Co-Founder, or ACEP’s second President. Dorothea was also a multi-book author, a thought leader in physical, mental and energy health, an accomplished artist, a professional-level pianist, a social activist, and a devoted wife, mother and grandmother. (Please read my PS below for more about this.)
And now my final thought: Though Dorothea and I did understand that our collaboration was “bashert,” I never said all of this to her while she was alive with quite the level of specificity that I have written in this piece. That’s because Dorothea’s essence and health were so robust that it never even dawned on me that she might be leaving at this time. I therefore didn’t make a priority of saying all of this to her. Big mistake, it turns out. Forgiving myself for not having made a point of doing this is part of my grieving process. Writing all of this for you and others to know is another part of my grieving process. My hope is that you will learn from my mistake by making a list of the most important people in your current and earlier life (personally, in your career, and in your service work), and making a point of heartfully sharing with them as many specifics as you can about why you’re grateful for your connection with them.
Dorothea, though I feel you continuing to connect with me, I also know you’re now on to your next big adventure, and I lovingly release you to it! I continue to send you my eternal love and blessings, along with my previously incompletely expressed gratitude for knowing you and for the blessings our collaboration produced!

PS: If you’re inclined to know Dorothea in a more expansive way than you might have prior to reading this, and I hope you are, I encourage you to visit this website of hers so you can appreciate how she was first and foremost a Life Artist: www.DorotheaLifeArtist.com. In addition to Dorothea’s art and music I particularly hope you’ll check out her book, “Second Chance at Your Dream,” because this is the book in which she shared her considerable wisdom about how to remain vibrant – or regain yours – during your second half of life. Dorothea was taken from this world far too soon for my preferences, but that doesn’t mean you can’t still benefit from her considerable gifts. I hope that our continuing to access her gifts will become one of the sources of comfort that Dorothea’s husband Chuck experiences as he grieves her having graduated before he does!
PPS: For ACEP’s tribute to Dorothea, click HERE, for the Healing Touch’s two tributes to her, click HERE and HERE, and for her obituary click HERE.
PPPS: Dorothea’s husband Chuck has requested that no flowers be sent. He instead suggests making donations to any of the organizations that Dorothea participated in, such as those mentioned in this piece. For instance, ACEP’s website is www.EnergyPsych.org