Seeing the Political Forest for the Trees: The Greatest News in an Ugly Election

I would be overstating it to say that I am delighted about the ugliness of the current presidential campaign. But not by a lot.

Excited would be a more accurate word. Excited because I’m seeing both of the main party candidates unwittingly helping to end of an era of profoundly dysfunctional and dangerously outdated leadership. Excited because I’m the third party candidate who is on the ballot in all 50 states help open doors toward more psychologically mature alternatives emerging for the 2020 presidential election cycle.

Mr. Trump’s version of leadership is the masquerade of business success. His divisive form of leadership foments rancor, justifies lying and coercion, and treats manipulation and corrupt business practices as acceptable. He might be running under the Republican banner, might claim to be a conservative, and might look like a Washington outsider, but he looks to me like he’s as old school as they come.

Mrs. Clinton’s version of leadership is the masquerade of political experience. Her stiff form of leadership foments distrust, justifies questionable practices and opaqueness about her dealings and her health, and treats the political status quo as acceptable. She might be running under the Democratic banner, might claim to be a progressive, and might look like a solid Washington veteran, but she too looks to me like she’s as old school as they come.

The only third-party candidate who is on the ballot in all 50 states, Libertarian candidate Gary Johnson, is daring to explicitly attempt to usher in an approach to leadership that I believe more accurately reflects our future: A willingness to be integrious, fully transparent and down-to-earth, and a capacity to be truly collaborative instead of competitively divisive. His track record as the Republican governor of a traditionally Democratic-leaning state (New Mexico) demonstrates that it’s actually possible to revamp what’s not working in government. Not by making meaningless surface changes that don’t resolve our underlying problems, but by having implemented viable root cause solutions that resulted in a more fiscally responsible state government significant and upheavals in the establishment’s dysfunctional forms of power.

Now, don’t get me wrong here. I’m not endorsing Mr. Johnson for president because I don’t see him showing up as any more presidential than either of the two major party candidates. Different from both of them but no more presidential. I am simply observing that Mr. Johnson has already been successful at bucking the dysfunctional status quo in state government (New Mexico, to be specific).

I do want to be transparent here by saying that I resonate with his synergy of fiscal conservatism, social progressivism, and eliminating our country’s profoundly (and costly) arrogant “we’re the savior of the world” approach to foreign policy. I don’t agree with some of the foreign policy changes he is advocating to shift our posture in the world, but I do agree with the intention. But, what I’m saying about him most of all is that this leadership approach might well be only one presidential election cycle away from being more fully embraced by the electorate. In other words, I’m saying that if the two major parties don’t watch their steps, the two-party system as we know it is on its way out.

I further believe by running this time around, Mr. Johnson is helping to plant the seeds for this more functional leadership style to emerge on the national scene. I similarly believe that Bernie Sanders’s campaign also helped to oil the wheels for the political climate transition that I believe needs to happen if we truly want to restore our health as a culture and a country.

Let me re-emphasize here that I’m not endorsing a specific candidate in this article. My purpose instead is to offer a different decision-making framework than you’re probably hearing from others about the upcoming election. The framework I’m proposing is to choose who YOU believe has the best potential to deliberately or unintentionally help our society and political machine to shift from old school dysfunctional leadership toward leadership shifts can help our country move in a healthier direction. 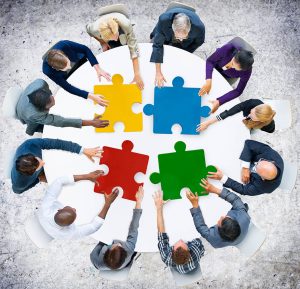 Synergy is the only solution

Here’s a run-down on the contrast between the two leadership styles to which I’m referring. One that I believe is independent of political/ideological orientation.

The way forward regardless of political orientation:

With all of this in mind, here is the different framework I am proposing for deciding who to vote for in the upcoming presidential election:

I hope it’s now clear why I’m really excited about the current election cycle. I believe its biggest impact will be to help shape the landscape of the 2020 presidential candidate nomination process, selections and campaign. I hope you’ll join me in thinking and talking about the issues I’ve raised in this article. I hope you’ll join me in embracing that our highest priority as citizens is to insist that our country exit the insanity of ideological polarization and politics-as-usual. I hope you’ll vote your conscience based on the priorities I’ve described in this article That, to me, is what most matters this time around.

The collaborative approach I’m advocating in this article is NOT pie-in-the-sky. I have a decades-long track record of successfully training leaders in road tested step-by-step procedures for creating high productivity collaboration, accountability, and integrity. From businesses and nonprofits to politicians from locally elected officials and World Trade Organization ambassadors. To explore engaging my services, contact me via www.DrGruder.com